Qubes is a "security-oriented operating system" built atop the Xen hypervisor. Major functionality, including networking and user applications, is split across separate Virtual Machines ("domains" in xen-speak) which Qubes aims to securely integrate/orchestrate. The technical details are very interesting, and we'll get to some of them, but the first question is whether Qubes is ready for real-world use. 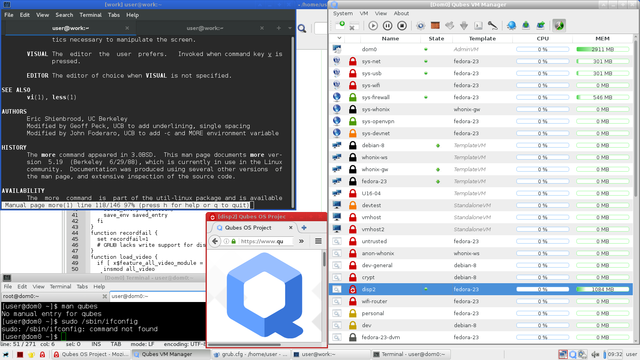 The screenshot shows a fairly typical, if busy, system (Qubes also provides much nicer screenshots). The Qubes VM Manager (right side) shows all the system domains including their type, security domain, name, status (green=running), template, and resource usage. The bottom left terminal is executing in the dom0 domain (which has no network interfaces for /sbin/ifconfig anyhow). The top left terminal is executing "man vi" in the work domain. A disposable VM is executing Firefox in the bottom center. Geany is showing some lines from an unrelated grub.cfg in the background (executed in the work domain).

Applications in Qubes ran pretty normal on the whole and overall speed felt unchanged. While VM startup some time (15-30s), VMs were generally responsive/fast thereafter (surprising given all the behind-the-scenes VM interactions). One "fix" to these startup times is to "autostart" commonly used domains on boot. This mostly solves the issue, except for disposable VMs which are created/destroyed on demand.

The learning curve to use/customize Qubes was fairly steep, but implementation choices felt reasonable and well thought out. It still took a lot of reading and some getting used to however. For example, the VM templating system meant most VMs could only permanently modify specific locations, which was sometimes surprising. Security domains also didn't feel very natural, but I haven't found the right balance between one-VM-for-everything and one-VM-per-application. Most critically in my case, my thousands of VirtualBox VMs used for local development and testing don't play well with Xen.

Overall, Qubes OS made some very smart architectural choices that appear to add strong protections. It didn't seem very well suited to my specific (development focused) workflow (covered more below), but I was very pleased with the ease of use and will continue using it on my laptop. In an ideal world (wherein I eventually escape the VirtualBox lock-in, resolve security domain overuse, and fix several less important quality of life issues) Qubes OS may make a great next OS. For security minded individuals with more standard environments, Qubes OS may be the right OS even now.

Download Qubes Release 3.1 and verify the signature as below. Frustratingly, it doesn't appear possible to verify the Release Signing Key without ultimately trusting the Master Signing Key. --list-sig appears to verify at least the short key id, but that is not secure.

Installation was straightforward even with preexisting software RAID and disk encryption. Everything basically worked out of the box. I choose to install Xfce instead of KDE, which no longer requires [a] notable amount of manual configuration, and the system started without any headaches. Very impressive.

Qubes OS gave a very promising experience on the whole, but many non-critical technical issues popped up all the same. These are covered in no particular order below: